La Pellegrina was founded in 1988 by dancer Dorothée Wortelboer and musician Dirkjan Horringa for the organization of summer schools abroad. In the first years of La Pellegrina the courses were held in Italy, with historical dance and -music as subject. Since 1991 the courses have acquired a much wider scope and take place in Czechia, this summer for the 30th time.

Alison Cooper: "What I like best is playing all this ancient music in such ancient surroundings - the monastery, the church, the castle..."

Margo Huggers: "I often skip lunch to go for a walk. Just outside the town, the woods and the river are lovely."

What does La Pellegrina mean?

La Pellegrina (the Pilgrim Woman) is the name of a Italian play from the 16th century. When this play was to be performed at the marriage of Ferdinand I de' Medici, grand-duke of Tuscany, with Christine de Lorraine, granddaughter of the former queen-mother of France, they decided to make the play a little more lively. Between the play's five acts they added intermedii, musical interludes which were sung, played and danced. They also used spectacular machines which could make gods fly down from the sky and make boats float on stage. These intermedii made a huge impression, which eventually led to the birth of opera as an art form. The Intermedii per La Pellegrina from 1589 was in fact one of the first opera-like productions. Without it, Orfeo from Monteverdi would not have been imaginable.

In 1988 Dorothée Wortelboer and Dirkjan Horringa were invited to do a master class in Italy with the Intermedii per La Pellegrina as main subject. The inviting organization then went bankrupt. Dorothée and Dirkjan decided overnight to organize the summer course themselves. To facilitate this they had to found an company and to choose a name for it; La Pellegrina was the obvious choice. Although in the beginning the focus was on the historical dance and opera, La Pellegrina nowadays doesn't focus on these subjects exclusively anymore, but covers a much wider scope of vocal and instrumental music from the renaissance until now.

La Pellegrina focuses on music from the Baroque, the Classical period, the Romantic era and the 20th/21st century. The courses in Czechia focus on the rich Czech music culture. But there will also be attention for the German, Austrian, Hungarian and Slovakian composers, who belong after all to the same cultural area. For all the courses the century-old historic buildings in which will be rehearsed and where the concerts will take place create a unique atmosphere and lend extra inspiration to the musicians.

Marinus de Mooij: "I've learned so much. There are so many tutors that I often had the impression of having private lessons."

Conductor Dirkjan Horringa is the driving force behind the summer courses, cooperating closely with an international team of specialised musicians. 'Each project consists of ten days of rehearsing for six hours a day,' he explains. 'Half of that time is spent in close contact with specialist tutors. The great thing about the course is that all the time you are surrounded by tutors, instruments and voices, so you can imagine there is a lot of playing outside official rehearsals, even in ensembles of unusual composition.'

Erika Ploeger: "After ten days of rehearsing everybody is ready for the big concert which really gives you a kick. Afterwards, we play salon music on the goodbye party."

At a rather high level

The Czech summers in Bechyně consist of three projects, for chamber choir and orchestra, symphonic orchestra and chamber music and for early music specialists. Needless to say that there is both serious work and good fun on a good musical level for passionate singers and instrumentalists.

Concert at the Riding School, Bechyně

Evelien Tollenaar: "Everything has been arranged when you get there. All you need to do is pack your instrument and go. Once in Bechyne, there is ten days of worrying about nothing, except playing the right notes" 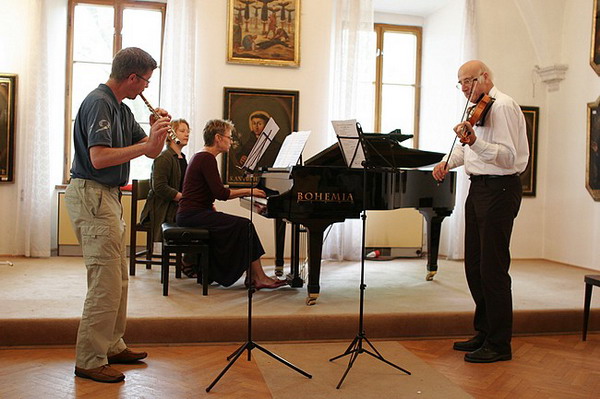 Jonelle Soelling: "Preparing to take part in this music festival really motivated me to achieve a higher level of playing. Being part of an international musical community in Czechia was a wonderful experience" 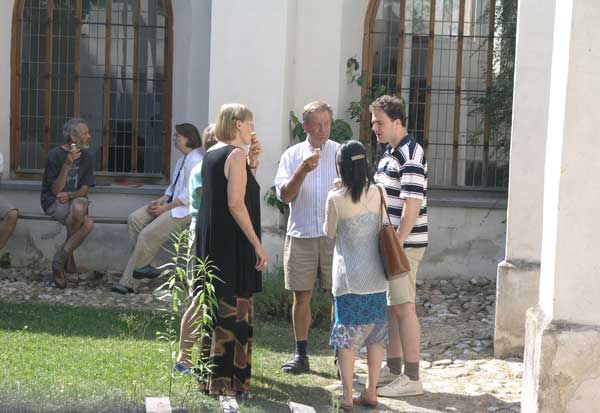 Discussion in the monastery cloister, Bechyně

Wilma Luining: "Since everybody in the course loves music, it never takes long to get to know the others, even if you have come on your own."

Fransje Eiselin: "For me, travelling is difficult as I am blind. However this is my third time in Bechyne. It is easy to hitch rides with other particpants, and travelling together adds to the fun."

Martin Ashton: "After every rehearsal we brass players feel an enormous need to taste the Czech beer in the little pub on the corner." 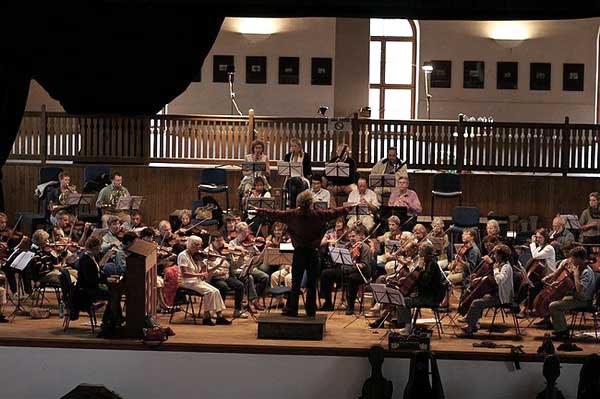 Orchestra in action in the Riding School, Bechyně

Martha Petringmeier: "From Germany, where I live, Czechia is not far at all, but it is exotic enough to have that feeling of being on a holiday somewhere far away."