The former monastery of Nieuw Sion in the Salland forests near Deventer in the Netherlands is the venue for this year's seven-day baroque course. This course has two aspects: on one hand, a program of small ensembles of singers and players of 'early' instruments, both vocal and instrumental separately or in combination. On the other hand, there is a joint program with cantatas and instrumental works by Georg Philipp Telemann (1681–1767). All singers and instrumentalists participate in this program.

Jeroen van Bergeijk: "The ideal holiday spending: many days of hard work in a monastery, immersed in music, with an inspiring group of music lovers"

The most important part of the course is working in small ensembles. Everyone is part of two different pre-arranged ensembles, both of which are treated equally. The ensembles work most of the time under the intensive supervision of the teachers. The ensembles present themselves to the other participants at the end of the course; in mutual consultation a number of ensembles can participate in the final public concert. This year the focus is on Telemann, but this is optional for chamber music. Feel free if you prefer to play or sing English, French or Italian music in the small ensemble program.

All formations from quartet upward are possible. The ensembles will be assigned very soon, so you can prepare at home. That is why quick registration is essential. Within the possibilities of the course, wishes for pieces and instrumentation are taken into account. The course is open to individual participants and permanent ensembles. There is also time for occasional combinations in the evenings.

Lea Schuiling: "Nice of course, doing a piece like this for choir, soloists and orchestra. But the chamber music is really an asset! Singers and instrumentalists, one to a part, with coaching by all teachers ... Something you rarely get the opportunity to do! And when the teachers sometimes contradict each other, .. well, .. that gives space"

Georg Philipp Telemann was born in Magdeburg in 1681. He learned the rudiments of music in school, as all German children did, but otherwise he taught himself music, mainly by studying the scores of Jean Baptiste Lully and André Campra. Telemann is said to have composed motets and other pieces for the church when very young, and by the time he was 12 years old he had written almost the whole of an opera. In 1701 Telemann entered Leipzig University as a law student. In 1704 he became organist at the Neukirche in Leipzig and founded a student musical society called the Collegium Musicum. He wrote several operas for the Leipzig theater. He was chapelmaster at the court of Eisenach (1709-1712) and in Frankfurt (1712-1721). He then became cantor of the Johanneum and music director in Hamburg, and he held these posts for the rest of his life. He was offered the position of music director at Leipzig in 1722 but declined it, and Johann Sebastian Bach received the appointment. Telemann made a number of trips to Berlin, and in 1737 he visited Paris, where he was influenced by French musical ideas and style. He died in 1767.

Telemann composed with rare facility and fluency in a variety of styles. George Frederick Handel is reported to have said that Telemann could write a church piece of eight parts with the same ease as another would write a letter. He composed literally thousands of works, including 12 complete cantata cycles for the liturgical year, 44 Passions, oratorios, funeral and wedding services, chamber music, about 40 operas, and over 600 overtures in the French style. Whereas J. S. Bach could maintain his individuality when he wrote in the French or Italian style, Telemann prided himself on taking on the characteristics of every national style, writing in what was then called the new style galant. Bach's cantatas are familiar, of course, but Telemann's are much less so. One biography credits him with more than a thousand church cantatas, a number that dwarfs Bach's 'mere' two hundred or so.

Until recently, only a few of the Telemann cantatas were available in modern editions. An example is the compelling mourning cantata Du aber, Daniel, gehe hin (TWV 4-17), which is performed with some regularity. But there are many more such treasures just waiting to be discovered and made available in modern editions. The cantata Ihr seid alle Gottes Kinder TWV 1:915 for the 3rd Advent is an example of such a treasure, which until recently was buried in a dusty archive. But it was transcribed and published in... Canberra, Australia!

Canberra Baroque Editions was founded in 2016 by Peter Young, one of Canberra's leading musicians, who specialises in bringing back to life great musical works of this wonderful age. Peter has produced many scores for performance, including a comprehensive collection of Charpentier's music, Telemann and others. Most of his editions are derived from the original manuscripts or early prints. Many are works which have not been published before. Others can only be found in expensive library volumes not suitable for practical performance. Canberra Baroque editions are accurate and easy to read. The scores are available at IMSLP. On request Peter prepares performance materials like instrumental parts and vocal scores. He has kindly agreed to provide performance materials of otherwise unavailable cantatas to the course.

This cantata is an example of the great music we can choose from for this course. The final choice will be made as soon as we have an overview of the line-up, so that we can provide as much 'customization' as possible for every singer and instrumentalist in terms of challenges. 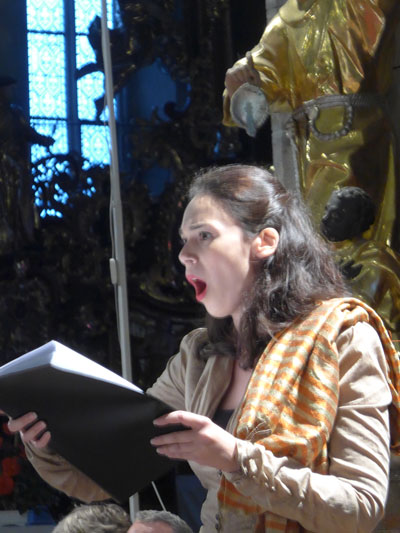 There is room for up to 20 experienced singers. To qualify you must meet the following requirements:

To qualify you must meet the following requirements: 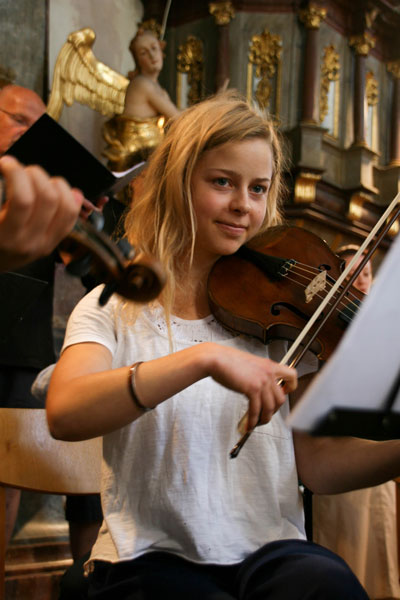 Staffan Rudner: "I think it was great that the tutors also took part in the music as players. Marco Vitale in particular, who dared to play the baroque oboe despite not being professional on that instrument" 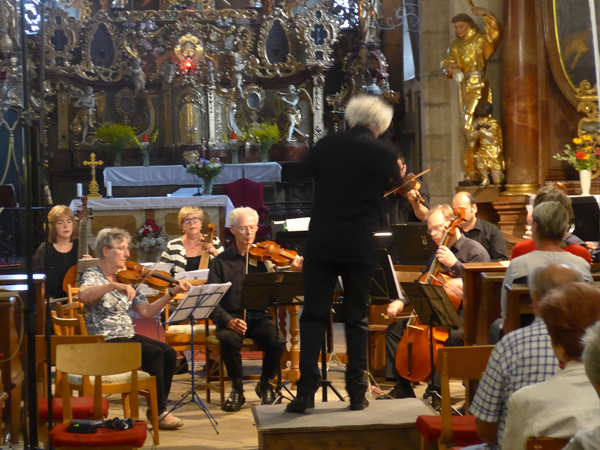 Staffan Rudner: "The tutors were able to adapt to the potential of all of us. After the course a new energy has come to our practicing and playing at home."

Monastery Nieuw Sion has existed since 1890 and was a Trappist monastery until 2015. The last monks then closed the door behind them and found a new place on Schiermonnikoog. Since then, a wide range of spiritual, as well as cultural and musical activities have taken place. More information can be found here (in Dutch):

Roeland Gerritsen: "To make music on a high level (with qualified teachers AND students) at a unique location in Europe in a fantastic atmosphere, I can heartily recommend this to anyone" 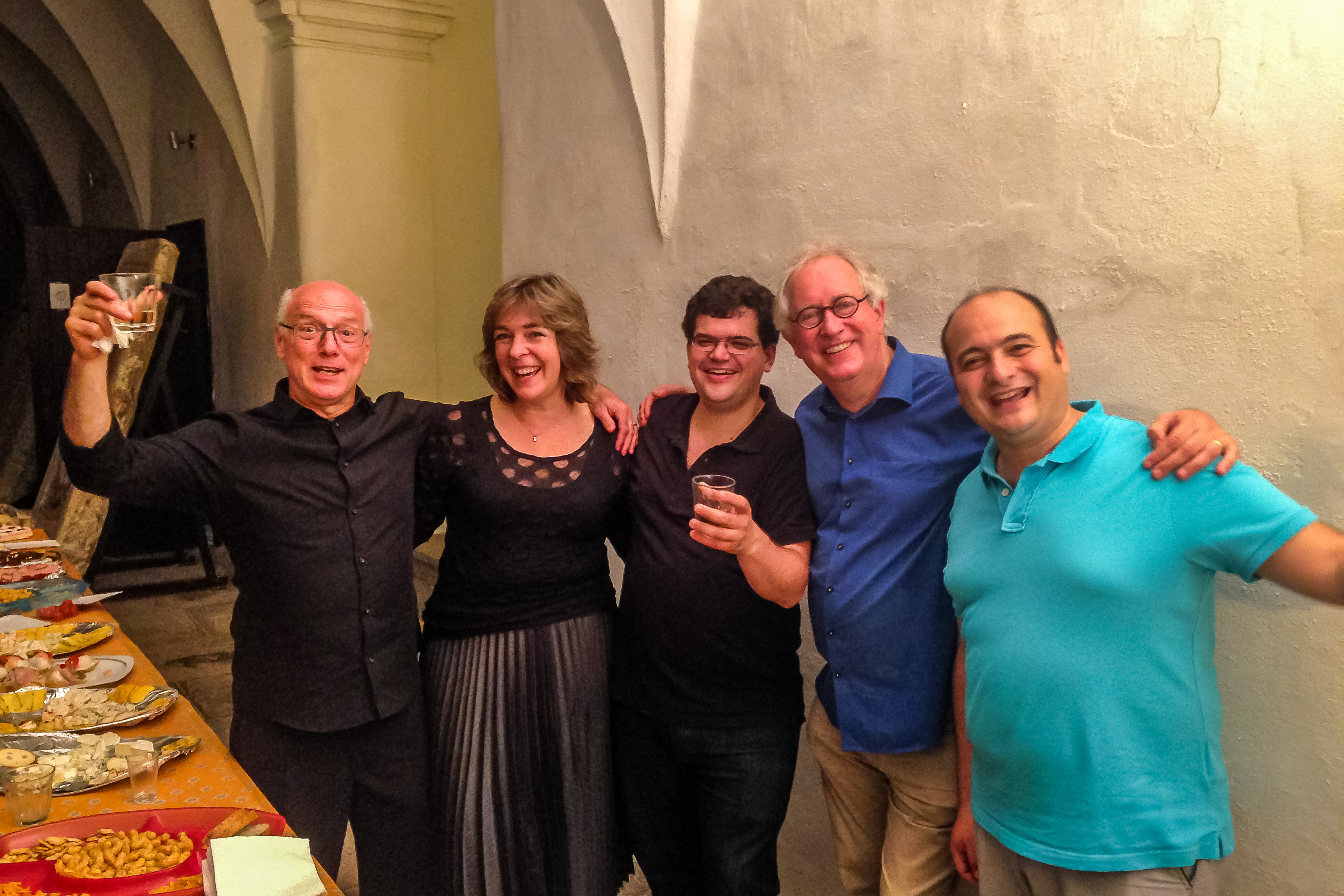 The tutors giving a toast to a successful concert

In order to register, please fill out this form and pay a deposit of EUR 250 (which of course will be refunded in case you cannot be placed).

Frederiek Muller: "So wonderful that it is already music from the first moment!"